Findings from Latest US Inflation Report

While August's inflation was slightly lower than July's, yearly inflation is at 5.3 percent, and in key sectors like energy and vehicles, inflation is much higher.

Many economists were eager to read the report given the US rising inflation in 2021, primarily caused by the Biden administration's unprecedented stimulus package of over $3 trillion.

When looking at the report, the first number one has to read is the rise in prices during the last 12 months. From August 2020 to August 2021, prices rose by 5.3 percent, more than twice the Federal Reserve's inflation target of 2 percent per year.

Regarding energy prices, these rose by 2 percent just in August, making it 25 percent over the last 12 months. This increase has been primarily due to an increase in international oil prices.

The index for used vehicles has risen by 32 percent since August 2020. During the same period, new vehicles rose 7.6 percent, the most considerable 12-month increase since 1981. This increase in vehicles is primarily caused by supply chain shortages.

Regarding housing, the shelter index increased 2.8 percent since August 2020.

The index for healthcare services has risen 3.5 percent since August 2020.

Overall, the American people have expressed some concern for the country's rising inflation, especially those living paycheck to paycheck. Inflation hits workers the most, as they see their salaries stagnant while prices increase day by day.

Policymakers answer these concerns with the argument that today's inflation is not permanent but transitory. They argue that most of the inflationary pressures come from the fact that the US economy is running again, after months of inactivity because of the pandemic.

Since the spring, economist Larry Summers has been writing about the risks of the Biden stimulus program. At the time, Summers said that the program was simply too big, roughly three times the amount of money that was "lost" because of the pandemic.

"Team transitory on inflation is encouraged by the lower headline and core CPI in yesterday's report. Given their emphasis on special factors, why aren't they alarmed
by median inflation at a 14 year high?," Summers said last week. (see chart below) 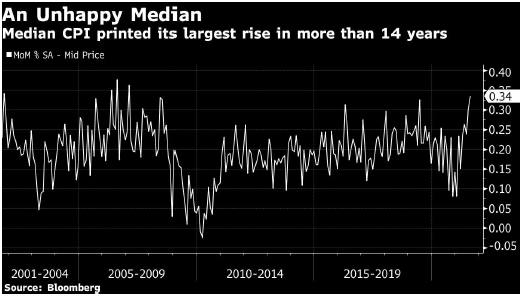 Here at FTN, I similarly wrote that the stimulus was going much further than what was necessary to mitigate the economic effects of the pandemic:

"If the pandemic had never occurred, the US economy would be $900 billion larger today. Therefore, a stimulus program that seeks to compensate for this shock should be around a trillion dollars. In contrast, with President Biden's proposal, the stimulus would be three times greater than the external shock produced by the pandemic."

Beyond the magnitude of the stimulus, I also think that economists should be concerned with the way the money is being spent. In programs that are this big, chances are that the money is not being used with efficiency. On the contrary, the odds are that the $3.4 will go directly or indirectly into the pockets of interest groups, inefficient business projects, unfair subsidies, etc.

In fact, I think the poor will be the ones who will end up paying the bill. In the short run, we are already seeing this. The rich do not care whether food and rent are a little bit more expensive. The poor do.

And in the long run, who will end up paying the US government's debt? I can tell you something; the rich will not. The poor will. A tragedy. An unnecessary transfer of wealth from the middle and lower classes to the top.

Jorge Jraissati is a Venezuelan economist and freedom advocate. He is the Director of Alumni Programs of Students For Liberty, an NGO advancing the ideas of a free society in over 100 countries. Beyond SFL, Jorge is a research consultant for IESE Business School, an economist from the Wilkes Honors College, and the President of Venezuelan Alliance, a policy group specialized in the Venezuelan humanitarian crisis. Jorge is a weekly columnist here at Freedom Today Network.