The special economic zones could bring the dynamism and modernity that Latin America desperately needs.

Throughout its history, Latin America has been anything but a success economic story. In our region, the vast majority of people are still living in poverty, with most of them suffering from the lack of essential necessities, such as having energy, running water, and even a proper home. Today, our region not only is the poorer in the western hemisphere but also the most economically unequal.

This, despite having considerable natural resources, a strategic geographical location, a young population, and all the conditions necessary to achieve true economic integration, such as a common language, religion, and a history of peaceful relations between our nations.

In no other country this is more evident than in my own country, Venezuela. In this country, we have everything to be successful. We have one of the best human capitals in the region. We have amazing beaches and opportunities to develop our tourism industry. We are in a perfect geographic location. And, if these were not enough, we have the largest proven oil reserves of any country on earth, which by itself, could guarantee us a considerable source of income that most country could only dream of.

Yet, despite this, Venezuela is bankrupted, and its economy collapsed, all because of a series of economic policies that have been implemented since the socialist revolution took over in 1999, policies like price caps, production quotas, and an overall strict set of regulations. As a result, 90 percent of our people live in poverty, 80 percent in extreme poverty and over 20 percent of the population have left the country in recent years, the biggest migratory crisis in the region’s history.

While Venezuela’s collapse is unprecedented, it represents the overall failure of Latin America, a failure that has been produced by political causes, as I mentioned at the beginning. For this reason, many people are starting to believe in different development strategies for the region.

In this debate, perhaps the most interesting and important one of these proposals are the so-called charter cities or special economic zones. The term is used to designate areas in which companies are taxed very lightly or not at all in order to encourage economic activity. These zones are designated by the trade and commerce administrations of various countries.

In the region, Honduras is pioneering this concept, a country that has been historically underdeveloped, dependent on remittances, and extremely poor. Therefore, Honduras is, right now, creating special economic zones with the intention to test whether this new model is feasible and preferable. In fact, the country’s legislative branch ratified the projects last week.

In terms of its impact on the economy of Honduras, the growth rates of the economic zones will be exponentially better than the ones in mainland Honduras, According to a study by the Francisco Marroquin University. Hence, the study expects a considerable GDP increase in the special economic zones. 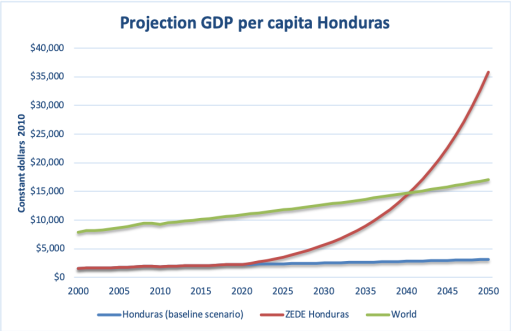 This optimism is perhaps the reason that well-known economists support the project, most notably, Paul Romer, who won the Nobel for his research in development economics. Romer argues that charter cities are the future of the third world. He believes that,

“The world can create dozens, perhaps hundreds, of new high-density "charter cities" to encourage faster growth that is greener too. Each charter city could be a place where millions of poor families could become residents, live, and work under better rules and lift themselves out of poverty. Inspired in part by Hong Kong and China's special economic zones, such cities would give millions of desperately poor people their first formal-sector jobs, in many cases starting out in labor-intensive manufacturing (e.g. assembling garments or electronic devices) and services (e.g. call centers, outsourced business processing, or software quality assurance).”

This is why I am also optimistic about this type of new economic zones, which could bring the dynamism and modernity that Latin America desperately needs.